Episode 185 - We Find Ourselves

Shoulders and back are covered in mushrooms

Throden is a Lizardfolk druid of the Circle of Spores played by Ben in season five.

Throden has green scales and wears very little in terms of clothing or armor aside from a black cloak draped across his back and shoulders. This cloak is covered in mushrooms that also cover Throden’s back and shoulders. He appears to stand hunched over, but in reality this is simply due to the vast amount of mushrooms growing on his back giving him a hunched appearance. He has a dark red crest on his head, like most members of his clan. His left eye is a normal yellow colored eye, but his right eye is strangely bright green. He also carries a wooden club and a shield made of bone and leather.

Throden had a wife. She was killed in some wider tragic event, although came back in the show as an aware undead.

Throden doesn’t really get human society and finds their interactions perplexing. He thinks differently to them, but by his own values appears to be a good person.

Throden is taken prisoner by the Drow along with Irpaks, Fanel, Raquel, and Clover in episode 185.

Clover, "Didn't it serve its time when it was alive?"
Throden, "Yes. And then it served more time in un-death."190 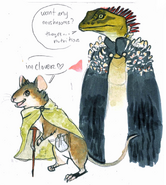 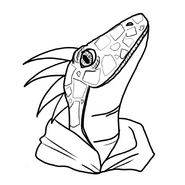 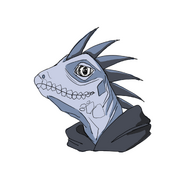 Fanart by Casey (@case_race)
Add a photo to this gallery
Retrieved from "https://tabletop-champions-podcast.fandom.com/wiki/Throden_Sauriv?oldid=3322"
Community content is available under CC-BY-SA unless otherwise noted.