Minos Stoutheart is a Half-Minotaur samurai played by Matt in season three.

Minos is a half-minotaur samurai fighter that has Akuma prayer necklace that has a symbol of each element of the samurai island he was from.

Minos was supposed to be born as a human, however The Shock happened and he was born as a Half-Minotaur. After Minos was born, his parents were on the run, ultimately leading to a shipwreck. Minos ended up on the island Afarmi that are inhabited by Samurai Orcs. On this island Minos learned his samurai skills, and he took the name Oda Masashige.

In Haven, Minos sleeps on 6 small beds lined against each other, because there are no beds large enough for him098.

Minos has learned how to tie ropes on Afarmi so his skills are very bondage-ish looking100. 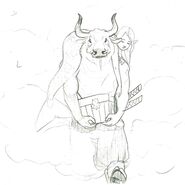 Fanart by MrLich
Community content is available under CC-BY-SA unless otherwise noted.
Advertisement