Kallastin Sallerov, a.k.a. Kallas is a Tiefling rogue played by Ben MacDonald in season four and six.

Kallas has pale skin and 4 small horns that protrude from his forehead. This has allowed him to more easily disguise his infernal heritage… from afar at least. He generally wears a tricorn hat such that the brim makes it difficult to notice his horns except from up close. In addition, he wears leather armor and a coat (both made from wyvern leather), which served as his uniform while he was an investigator in the city watch in T’eumar. His most strikingly bizarre feature though (not counting his tail) are his orange eyes that almost seem to glow like embers in a fire.

Kobold bodied Kallas: He's a white little dragon man with wings and the same eyes as the tiefling version.

Kallas died after succumbing to demonic magic when he refused to kill Boone per a demonic contract. 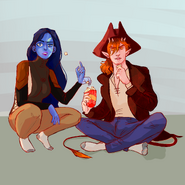 Fanart by @wishbit
Add a photo to this gallery
Retrieved from "https://tabletop-champions-podcast.fandom.com/wiki/Kallastin_Sallerov?oldid=3389"
Community content is available under CC-BY-SA unless otherwise noted.