Episode 185 - We Find Ourselves

Irpaks is a Human bard played by Kyle in season five.

Irpaks is a human male that looks to be in his late 60s to early 80s, hard to exactly tell. He is a somewhat lanky and his clothes drape off his thin body in a way that says he's had them a long time and they once maybe held his body a bit more snug than they do today, he has white hair that is held back behind his head tied in a knot, he has very pale skin marked and wrinkled from his years on this earth, and he has stark blue eyes. (This description from Kyle on the Discord Fan-Art Channel.)

Irpaks is taken prisoner by the Drow along with Throden, Fanel, Raquel, and Clover in episode 185.

"Everybody dies. Your hero, Colin, died. And why did he die? To make his life worthwhile. You can panic about your death—or you can make your death mean something."187 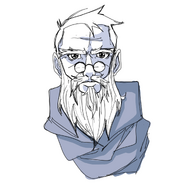 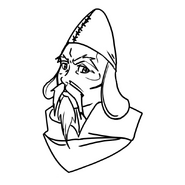 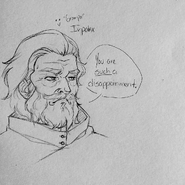 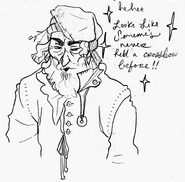 Fanart by @wishbit
Add a photo to this gallery
Retrieved from "https://tabletop-champions-podcast.fandom.com/wiki/Irpaks?oldid=3115"
Community content is available under CC-BY-SA unless otherwise noted.