Six fingers on each hand

D'Nias has shoulder-length silver hair, a shiny, milky skin color, purple eyes and ram like horns. She has six fingers on each hand, which she uses to play the lute. D'Nias wears black leggings, black boots, a silver vest with a black shirt and a purple cape.

Ale dragon by her side.

D'Nias was adopted by gnome parents when she was very little and she has no memories of her real parents. She has traveled most of her life with gnomish groups and therefore has no particular homeland.

D'Nias gets involved with a group of adventurers after Skrag asks her to bet 200gp on his opponent in a tournament.

She becomes the bearer of the Oculous, and safekeeps it until the time of the Shock.

D'Nias is drawn back into the fate of the realm during the penultimate battle against Alenia143.

After the conclusion of season three, D'Nias teams up with Skrag, adventuring the realm and helping the reconstruction effort. The two fall in love, and have a daughter together whom is named after D'Nias' mother and Skrag's sister: Laura-Leena Var-Ragnall191.

She and Skrag are called back into action after their daugher asks them for help. While they follow a lead into the Ziragzar Spires, they are captured by followers of the True God.

D'Nias is currently not retired. She is alive and not well, held in the clutches of the True God191 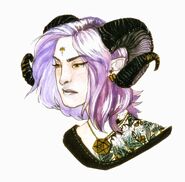 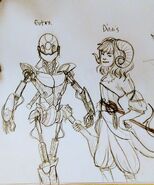 Fanart by @wishbit
Add a photo to this gallery
Retrieved from "https://tabletop-champions-podcast.fandom.com/wiki/D%27Nias_Var?oldid=3141"
Community content is available under CC-BY-SA unless otherwise noted.