Colin is an elder mousefolk monk played by Kyle in season three.

Colin is a small (under 3') mousefolk. He is a weary old looking mouse who is either aging or has simply experienced a lot of life. He wears monks robes that are weathered, torn, and worn. He maintains a fairly stoic look and is otherwise barefoot. His right ear is badly scarred with what was once a bite from a cat before he gained intelligence after the shock.

When the Shock happened Colin was already fairly old for a mouse. He was born as a mouse, however after the Shock he became conscious. Colin has some very communistic ideologies.

Colin starts out season three as a member of the Havenguard. 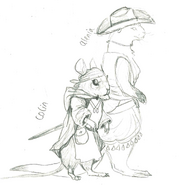 Fanart by @wishbit
Community content is available under CC-BY-SA unless otherwise noted.
Advertisement