Cam is a human character played by Kyle in season four and season six.

Cam is a latinx looking human male with an olive complexion, long black hair (although multiple commissions have it as dark red / pinkish and honestly its all good) and a thin scruffy beard. He wears worn and rusted chain mail with a tattered traveling cloak covering it. He has a quality buckler shield that has seen a lot of use and everything about him screams "bath me". Except for his sword, which is immaculate and way too fancy for the kind of person who looks like a night in a stable would be an upgrade. The sword has a golden metallic dragon's head pommel breathing flame that is the handle.

Extremely guarded at the start of Season 4, we eventually learn that Cam is the last living heir to a great noble house in the City of Jildos: House Macwell. Leopold Duncan Macwell, Cam's real name, is on the run from his own father who is actively pursuing him.

To avoid being discovered by agents of House Macwell, Cam deliberately dresses and behaves in a manner as different from that of a Jildos noble as he possibly can. Hence, he dresses in a rags, sleeps out of doors, and is covered by several layers of dirt at all times. He clearly states, however, that he is not stinky. 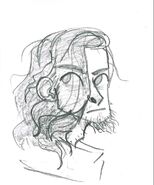 Fanart by sailtheplains
Add a photo to this gallery
Retrieved from "https://tabletop-champions-podcast.fandom.com/wiki/Cam?oldid=3288"
Community content is available under CC-BY-SA unless otherwise noted.