a brother,
the De'Boon family

Boone is a Human Paladin played by Stephanie in season four and six.

Boone was born Devonshire William Frederick Dempsey George Rufus De'Boon XVII232, Boone for short, as the first female born to her family in sixty-three generations. The De'Boons are all trained as paladins to defend their city of Caimaninae, and while Boone received this training as well, being a girl, she was never expected to use it. In many ways, she considered herself stillborn. She grew up in the shadow of her older brother, living while feeling dead.

When her brother came of age, he was engaged to Helene Deschamps of Jildos. Helene was interested in Boone rather than her brother, however, and Boone wooed and bedded her three weeks before the wedding, both to make a decision of her own and to get back at her family. In the uproar that followed, Boone felt alive for the first time. A week later, she was in her bedroom about to go to bed when she was grabbed from behind and her throat slit. She awoke beside her own grave with an opalescent scar on her throat and a strange necklace on her neck on the outskirts of Jildos. With this, she found a reason to live: to avenge her first and second death and to pay back Jazirian, the power that raised her. After completing these two goals, she hoped to die permanently for a third time.

The original, full length backstory which Stephanie wrote with a friend and gave to Sean, was released by her on discord in May 2020. It is quoted here in full:

“Sixty-Three. Sixty-Three is the number of generations that the De'Boon family has had only male children. Sixty-Three patriarchs and their brothers have ruled the De'Boon family and all have been Paladin's. Paladin's sword to protect the city of Caimaninae from the swamp it grew out of and the treachery from within. Sixty-Three times did the God's grant a male heir to the De'Boon family and one-hundred and eighty-nine men have been born to the family since records have been kept in Caimaninae.
Ask me how I know this?
Because, quite simply I am Devonshire William Frederick Dempsey George Rufus De'Boon XVII, Boon for short, and I am the first female born to my family in Sixty-Three generations. In many ways I was still born. I was born dead. Dead to my family. Dead to the patriarchy. Dead to the world.
I have an older brother, the next in line. The true Paladin apparent. That which keeps the hopes of the De'Boon family alive. It is certain that I was raised in the ways of the Paladin as well. What else could they do with me? I was supposed to be a Paladin. I was supposed to carry on the family traditions. I was supposed to be male. So. I train. Rather, my brother trains, and excels. I merely "train". It passes the time. The time from when I wake up to the time I sleep . . . alone, or behind my brother in training . . . is taken up with training. I learned early on if I worked hard or worked not at all, the master at arms and those in charge of my prayers didn't care. My brother was the one alive. I was born dead.
As is expected, I grew bored. Bored of the training. Bored of the ritual. Bored of going to the sanctuary and going through the motions. Bored of going to the events in the High Quarter. Bored of keeping up appearances. Bored. If death was what I was born into – I lived a form of undeath. Like the zombies fabled to live in the swamp, endlessly walking about, from one place they are not wanted to another place where they are not wanted. To walk is as futile as to not walk. Born dead.
My brother came of age and the tradition followed. It was time to arrange a marriage between our family and another. This process would cement our standing in the High Quarter as well as prepare the loins of the one married to have another male heir for the De'Boon family. Status quo would be maintained. My brother was arranged to marry a beautiful young woman from Jildo's named Helene Deschamps. After meeting Helene and after many long talks I learned two things; Helene wasn't as happy as she could be about marrying my brother, and that she thought I was attractive.
I suddenly realized that I could not only make the first of my own decisions in my short life – but also use that decision to strike back at my brother and family. I wooed Helene and eventually bedded her, some three weeks before she was to become married to my brother. I didn't keep it a secret and was all too happy to allow my family to know. For the first time I felt like I had made a difference. For the first time I felt like they payed attention to me. For the first time I felt alive.
A week later, I found myself dead again.
I remember getting ready for bed. I remember seeing Helene being escorted from the family grounds. I remember smiling. I remember standing at the window. I remember suddenly feeling a hand on my chin and I remember being pulled closely to someone's body. I remember how warm they felt. I remember thinking that being held by a person who loved you could feel like this. Being held tightly and warmly. I remember the pain at my throat and the wet warmth of my blood running inside my night shirt. Then, I remember the darkness. When I think back on the darkness and what it was like I realize that darkness itself has no description. It is the absence of description. The only thing I know about the darkness is that it was worse to be not in the darkness. My eyes opened an unknown time later and I laid on the dirt next to a recently covered grave and a headstone with my name on it. I do not know how I came to this location. I do not know why my wounds are healed. I do not know why there is an opalescence to the scar that runs nearly from ear to ear. I do not know why I have this necklace on. I don’t know if my family lives. I don’t know any of these things and I am not sure exactly how much I care.
In some ways nothing has changed. I was born dead. Again, it appears, I am dead. In some ways everything has changed. There is now a crime that must be paid for. Until now I nothing to avenge. Now, I do. I have a reason to live. To avenge my first and second death and to pay back the powers that raised me to complete this mission. Then, I can die again. Let us hope that the third time is a charm.”

(Give some details of the character's life on the podcast.) 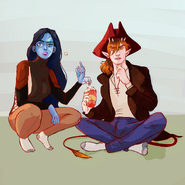 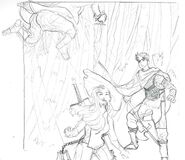 Fanart by @wishbit
Add a photo to this gallery
Retrieved from "https://tabletop-champions-podcast.fandom.com/wiki/Boone?oldid=3592"
Community content is available under CC-BY-SA unless otherwise noted.